Why is it that certain colors are “in” every season? In The Devil Wears Prada, Fashion Magazine Editor Miranda Priestly condescendingly told her fashion assistant it’s because designers choose colors for their clothing lines and their choices are eventually adopted by the mass market. Her exact words were, “In 2002, Oscar De La Renta did a collection of cerulean gowns… And then cerulean quickly showed up in the collections of 8 different designers. Then it filtered down through the department stores and then trickled on down into some tragic Casual Corner where you, no doubt, fished it out of some clearance bin.”

Harsh — but makes sense. But if retailers plan their assortment so long before they hit the shelves, how can they predict the right hues? As it turns out, there is a whole world of color pundits whose mission is to predict the next season’s shades.

One of the biggest color-predicting groups is the Color Marketing Group. In their fall/winter 2008 press release, they wrote that the biggest drivers of colors this season were the shades associated with the economy and environmental awareness issues. So far they’ve been pretty accurate. Among other colors, they predicted the “return of purple” and “fresh new grays.” That turned out to be true. In fact, Tamra blogged about those color trends earlier in the season.

Organizations like the Color Marketing Group predict the season’s colors, but other groups actually influence and help create the trends. One such group is Pantone. In a recent press release, Pantone announced the 2009 color of the year — mimosa. (In fact, Shop It To Me Trendsetter Jennifer Jane’s Style Journal wrote a great blog post about finding the color in her Salemail.) 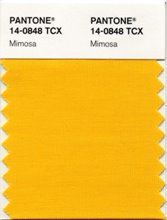 The golden yellow is brighter than I’d normally go for, but it’s hard to dislike a color that bears the same name as such a tasty cocktail. Pantone says the color expresses “hope and reassurance” in a “time of economic uncertainty.” Mimosa lends hope and reassurance? I think Pantone is on to something. In light of the economic uncertaintly, I predict brandy, mint julep, and whiskey will also be big.

Women + Shoes = Euphoria! In this newsclip, WCBS-TV interviewed a number of people about the psychology of women and high heels.  What brings this sense of joy that women experience from shoes?  And why

The constant debate around gift cards…  are they personal (allowing the recipient to choose the perfect gift for themselves) or impersonal (an envelope with a piece of plastic is so easily forgotten)?! A