Speaking of Olympic fashion, I’ve spent most of the weekend watching the games. Beyond the opening ceremonies, the athletes are rarely seen in fashionable attire; uniforms of all sorts are the obvious focus on camera. The athletes (both summer and winter games) select uniforms to enhance their athletic performance, and withstand tough weather conditions.

Interestingly, the Financial Times recently covered the trend of runway clothing encompassing performance and ‘intelligent’ fabrics, such as Gore-Tex, Neoprene, and Ecopelle. Immediately, images of wetsuits, swimcaps, and weather-resistant jackets come to mind. But for the runway?

The article shared that various men’s wear lines are including these looks: “Recent men’s wear collections from Raf Simons, Burberry Prorsum, Jil Sander and Prada have featured Neoprene, Teflon, Gore-Tex and new sci-fi treatments on a wide range of garments, from tailored suits to footwear.”

A few of the intelligent fabrics along with the designers who are incorporating these include:

The use of these high-spec fabrics supposedly justifies a higher price-point, due to the fact that they are more durable, breathable, and weather-resistant than their cheaper alternatives.

“In the past, people shied away from man-made fabrics because of their cheap connotations. But lifestyles are transforming. People need comfort and performance,” says Ligaya Salazar, curator of the Fashion V. Sport exhibit at the London based Victoria & Albert museum. As Catwalk Queen tells us, the Fashion V. Sport exhibit is digging deeper into the link between sportswear and its influence on fashion, including the use of athletic details in high fashion. The exhibit will run through January and showcases 60 outfits, features design drawings, photographs and movies of how athletic details have influenced high-fashion.

Personally, I can easily see these intelligent fabrics playing a larger role in menswear collections, but am left more puzzled imagining the equivalent in women’s wear…especially in this fall’s environment of softer and ultra-feminine looks (ruffles, bows, chiffon, layers, purple everywhere). Very tough to imagine without seeing photos, but I for one am excited to see how these performance-based fabrics come to life on the runway!

Inditex (Zara’s parent company) recently overtook Gap in sales. Because I associate Gap as such an iconic global brand, this news was surprising, and took a few moments to process. According to 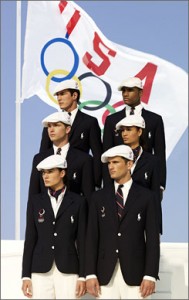 Tonight kicks off the start of the 2008 Summer Olympics, and Fashion and Athletics certainly are blending together! Project Runway’s challenge this week was to create a womens-wear look for the opening

Shop It To Me - The Inside Scoop
—
Gore-Tex on the Runway?!
Share this