It’s NY Fashion Week…and here on the other coast, we’re doing our best to keep up with the exciting happenings and show coverage.  It’s always interesting to explore the link between runway fashion and economic concerns.

After watching last week’s Project Runway starring Diane Von Furstenberg, I was especially intrigued with what she’d show for her spring collection.  As “WSJ’s Heard On The Runway” shared, the looks were more hippie and gypsy inspired.  It will be interesting to see how these runway looks transition into office-wear, and if the wrap dresses and easy throw-on elegance she is so known for will still surface. 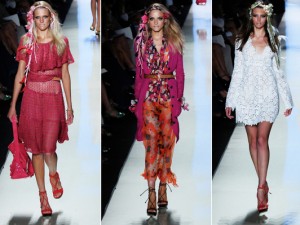 Photo courtesy of “Heard On The Runway”

Aside from Diane’s style showcase, I was captivated by the point that “Designers this season are hoping that striking looks and novel pieces will nudge shoppers to start spending on apparel again.”

Personally, I was a bit surprised by this approach because I believe there are two sides of the coin: 1) either being drawn to more unique and out-there pieces, or 2) being conscious of making your dollar stretch and buying understated yet premium basics that can be worn and re-worn season after season.

However, Diane isn’t alone with her gravitation toward boldness.  WSJ shares, “…several designers are hoping that daring styles will appeal to retailers in search of pieces that stand out as special in today’s sour economy. With apparel sales still soft, retailers are shying away from basic looks and searching for items that may spark an impulse purchase.”

“Heard On The Runway” Examples from Fashion Week included:

Designer Peter Som – striving for “striking, vivid looks” with bold prints in bright colors such as cherry red and tangerine with embroidered details. He even said, “The thing not to do is go basic when the economy is the way it is. “You have to entice the customer – it’s got to be a ‘gotta have it’ kind of thing.”

Designer Carmen Marc Valvo – although usually erring on the side of elegant and conservative, this spring is showing short dresses that are more revealing, with eye-catching details such as shiny patent leather mixed with lace.

Designer Tracy Reese – expressed “The shopper wants something that just grabs her and shakes her—when times are tight, that’s what clothes have to do. They have to speak to you and look compelling.”

We recently added a new Trendsetter category called “City Near You”.  I wanted to take the time to highlight a few of our Trendsetters who, from coast to coast, are making fashion and 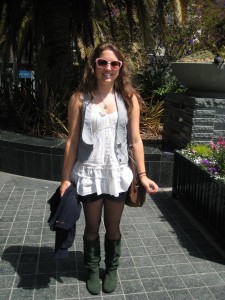 For our latest installment of San Francisco street style, we spotted this girl walking through Union Square. We’ll admit that tights with shorts is a very trendy look, but we dare you