It’s been awhile since I’ve posted my “weekly” reality TV fashion quote from the past year. But weekly or not, here’s quote #3.

“If you want a basic white tee, you can just get one from Michael Kors.” 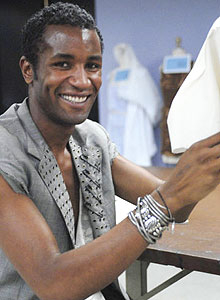 Jerrell was generally good-natured, but when he got eliminated, he let it all out! His bedazzled final dress was unfortunate, but I was still sad to see him go. Until his final elimination, he hardly made a snide remark about anyone (except for Kenley, which hardly counts). The sauce came out in full force when he took a final jab at Michael Kors before bidding everyone auf wiedersehen. He had some other zingers too, and Fafarazzi.com did a great job capturing them in their bio about him. On another note, Fafarazzi also pointed out Jerrell used to be a model. Who would have thought? Although I guess he did wear vests with no shirts a lot.

Last week, I found an adorable pair of black boots in my Salemail and immediately purchased them from Endless.com.  They were marked down from $138.95 to $99.90– pretty good deal!

As a petite 5’1″lady myself, I couldn’t be happier Shop It To Me is adding sizes XXS and 00! It’s a fool’s errand to try to search for