February may be a short, cold month, but its sales are as hot and sweet as a piping mug of Jacques Torres drinking chocolate.

Our experts scoured last year’s markdowns for more than half a million items from 150-plus online retailers so we can advise you on the best times to shop for the things you love.

They discovered that markdowns in February 2012 averaged 47% — compared with an average of 43% for the full year. For women, February 2012 markdowns averaged 49%. For men, markdowns were not quite as steep — averaging 43%, but were still the best of the year.

Presidents’ Day 2012 offered average markdowns of 48%, making it the top holiday for online sales. (In 2011, it came in second after Labor Day, with average discounts of 46%.)

But it’s not just that one weekend; you can find great discounts all month long: 15 of the 20 best sale days of the entire year fell in February 2012 (and the other five followed closely in early March).  On those 20 days, markdowns averaged 47% or higher!

While February markdowns are deep, there aren’t as many items on sale as at other times of year (you’ll see lots more items on sale during holiday season, for example).  So don’t delay if something you love is discounted. You won’t see better-than-average markdowns again until the end of summer sales in August-September.

What’s behind the sweetness of February sales? According to our founder and CEO Charlie Graham, “Retailers are eager to clear out winter merchandise so they can start selling spring items. That’s why there are so many clearance events during February and why Presidents’ Day ushers in a host of great sales.”

In 2012, the winter was particularly mild, so online retailers were aggressive with their markdowns. Nordstrom had a big shoe clearance, and several other retailers (Banana Republic, French Connection and Victoria’s Secret, among others) put “sale on sale” (take an additional percentage-off already reduced styles, for example). It’s perhaps why Presidents’ Day and Labor Day switched spots as the top sale holidays in terms of percentage off discounts.

While we can’t be certain that our stats mirror what happens at bricks and mortar stores, mass-discounters, or in other categories like housewares or electronics, we are confident you will find great clothing, shoes and accessories sales at hundreds of online retailers this month.

And with such great bargains coming up, the stuff you love may not last. Create Threads on Shop It To Me for all the clothing, shoes and accessories you care about or follow a few of our suggested ones Desk To Dinner, Night On The Town, Gifts Worth Stealing, On-a-Budget Picks Under $100 and The Perfect Black Bag. We’ll keep track of your individual preferences, and check 150 online stores each day — from Shopbop and Nordstrom to J. Crew and The Outnet — and make sure you get all the latest sale updates on the items you want.

For details on what to buy in February, check out the infographic below.

Methodology:  Shop It To Me, a free personal assistant for online shopping that updates you when things you love are on sale in your size, analyzed nearly 585,000 clothing, accessories, and shoe markdowns throughout 2012 available from over 150 online retailers. 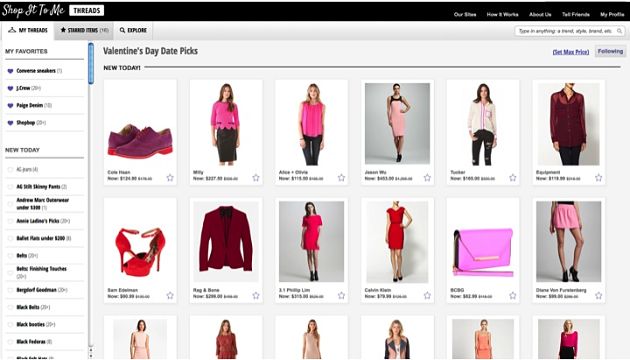 A Thread for all you lovers out there. Find the perfect ensemble in our Valentine’s Day Date Picks. Join Shop It To Me Threads to find out when the clothing brands and

The best basics and most fabulous prints are on sale this week! Stock up on basics from the James Perse sample sale up to 75% off, get 20% off select DVF.com styles