Remember when you first signed up for Shop It To Me and you typed in your Zip Code, then selected a list of brands that interested you most? Well, we’re a seriously curious bunch here at Shop It To Me—and we decided it was high time to take stock of what labels shoppers are lusting after, by Zip Code. We surveyed data from four major U.S. cities—San Francisco, New York, Los Angeles and Chicago; all week, we’ll be sharing the results with you here.

Turns out, your city—even your neighborhood—may imbue you with distinct sartorial preferences. You know, those stereotypes about New York gals wearing nothing but black, and Angelenos wearing their flip-flops *everywhere? *We’re just saying…. 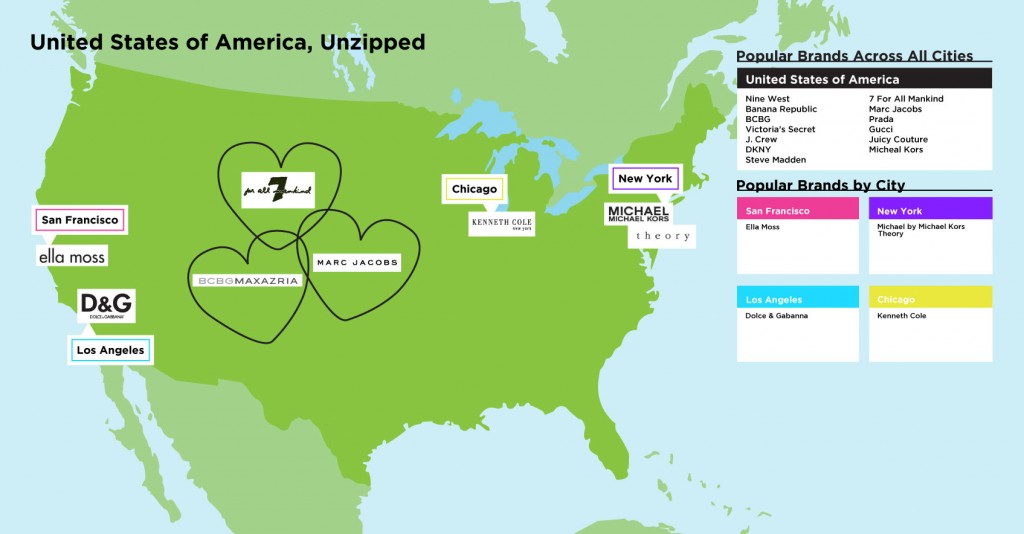 For instance, if you’re a resident of New York’s Columbia University area, 10025, Banana Republic probably tops your list of preferences, while living across town in 10021, the posh Upper East Side, means you’re more likely to favor Theory. 10025-ers cite Nine West as a footwear favorite, while 10021-ers covet Jimmy Choo. Meanwhile, downtown New Yorkers surveyed in neighborhoods from Soho to the East Village go for a high-low mix, from affordable label Free People to pricey Chloe and smaller luxury labels like Vince. Surprisingly, Tory Burch ranks higher in popularity among Soho denizens than on the Upper East Side, where she launched out of her apartment in 2004. And—hot among inhabitants of 10027 a.k.a. Central Harlem—well, it’s Victoria’s Secret!

On the opposite coast, Californians, both Angelenos and Bay Area residents, select casual lifestyle brands like Ella Moss and North Face on their must-have lists whereas those brands barely make a dent on East Coast top 10 radars. Maybe expectedly for a smaller city, Bay Area preferences don’t vary nearly as much as New York City from Zip Code to Zip Code—whether you shack up in Pac Heights or the Haight you’re probably a fan of Citizens of Humanity, Kate Spade and Diane Von Furstenberg. (Wait, Kate Spade is more popular in California than New York?) Los Angeles definitely divides on Zip Code lines. Don’t go looking for a cheap brand on the wish lists of your 90077 crowd (it’s all about Prada, Gucci and Dolce & Gabbana in Bel Air). Beverly Hills, however, prefers Juicy Couture. To get into humbler territory, a la Steve Madden, you’ve got to venture into 90027, also known as Hollywood, where the brands are no less mainstream but certainly more affordable.

Regional differences may obviously also be a matter of climate. If you’re living on Chicago’s Gold Coast (60610) or Wrigleyville (60657), you’re likely to be keeping warm in your practical but chic UGG boots. Chicagoans also demonstrate a definite preference for larger, established brands—makes sense for a city that prides itself on the “biggest” of everything, right?

Stay tuned throughout the week as we share even more highlights unique to the zips in each of these 4 stylish cities. Tomorrow, we’ll showcase New York & Chicago in more detail, and cruise over to the West Coast (San Francisco and Los Angeles) on Friday.

Shop It To Me (ShopItToMe.com), the popular free online personal shopper, took a random sample of its members in each of 4 major metropolitan cities, New York, San Francisco, Chicago, and Los Angeles, and analyzed the most popularly selected brands within each geography.  We compared the top 20 most selected brands for each area.  {Randomly selected sample: New York 26,000; Los Angeles 4,800, Chicago 26,000, San Francisco 10,000 members.} 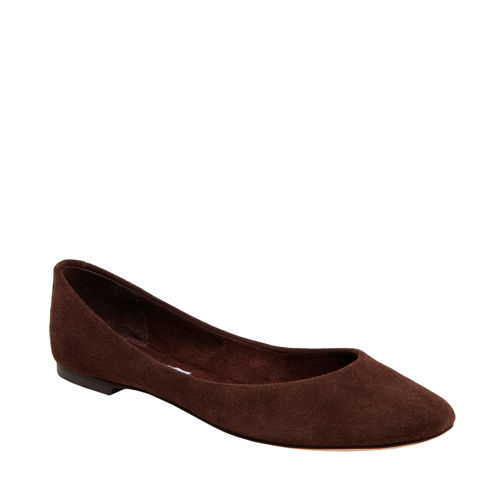 At just $19.99, these Steve Madden brown suede flats are a simple addition to the wardrobe.  For those who prefer a little more glitz, they also come in black sequin.  As a

Shop It To Me - The Inside Scoop
—
Shop It To Me, Unzipped: The Brands You Love Where You Live
Share this