Earlier I had promised I would blog about the best quotes of the year from fashion reality TV shows. Season 5 of Project Runway is over, but the snotty quotes endure. This week’s pick is from your favorite contestant, and mine, Kenley.

It’s a mermaid! It’s a Chinese finger trap! No, it’s Kenley’s floral-inspired dress! If the Season 5, Episode 12 challenge were inspired by sea monsters, I could understand. But in fact it was the Botanical Gardens. A purple plant inexplicably inspired Kenley to create a magenta dress with faux fish scales at the bottom. When Heidi told Kenley the dress didn’t look elegant, Kenley snapped at her with this bratty comeback. I have to admit I got sucked into the moment and felt badly for her when she cried, but I got over it when she tried to blame her attitude problem on the fact that her father was a tugboat captain. Umm…right.

In any case, she totally deserved all the smack talk from the other contestants.  “Kenley can make one hell of a ’50s dress, but that’s all she serves up,” Jerrell once said of her. I beg to differ. She also serves up one hell of a ‘tude. 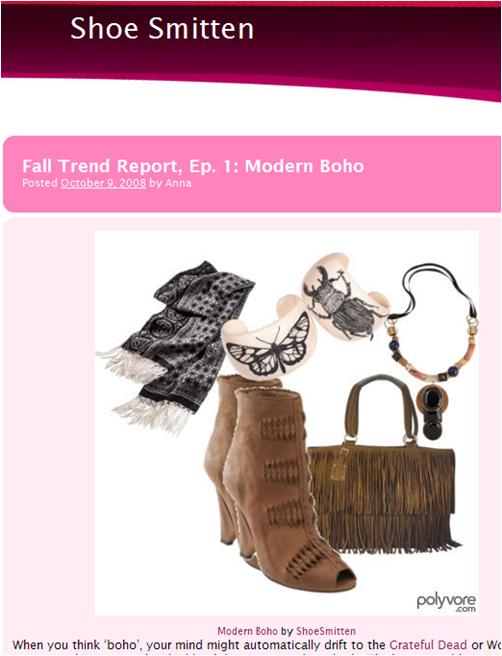 The celebs are all over this trend — fringed boots!  Minnetonka Moccasins, Boho-Chic, whatever you want to call it.  Recently, Trendsetter Shoe Smitten paired moccasins with other great boho looks. Another Trendsetter, Shopping And

At Shop It To Me, we have been riveted by a very exciting election cycle.  Given all of the news cycles dedicated to the election (and recently to fashion choices by both candidates)